Been mulling Glen Alleman’s Herding Cat’s blog post entitled Process Improvement In A Complex World.  He states:  “Our the mention of the term intent of the commander without understanding that filling out that intent(,) requires complete capabilities to act…in the absence of direct supervision.”  Then, during some light reading from Memoirs of General W. T. Sherman came upon his special field orders for his famous March to the Sea.

For background:  When U. S. Grant became head of the Army he placed Sherman in his former command.  Grant’s strategy was to press the enemy in all areas to bring a speedy end to the war.  The Confederacy, as it turns out incorrectly, identified its capitol Richmond, as its strategic center, and so expended a great deal of resources and depended on its best general–Lee–in defending it.  No doubt that Richmond had an impact on morale but the logistical center of the Confederacy was in Atlanta and it was not well defended.  All of the Confederacy’s major rail lines intersected in Atlanta, it was its financial center, an industrial center, and it was its major market for foodstuffs.  Its countryside was the breadbasket of its army and had not suffered from the effects of the war. 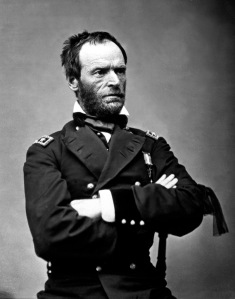 Sherman captured Atlanta and with it the logistics and industry that were necessary to sustain the insurrection, but the Confederacy’s armies could still move and harass the Union’s armies given local support and sustenance.  In addition, the seaports of Savannah and Wilmington still provided supplies from European countries hoping to see the partitioning of the United States succeed.  It was during this time that he came upon the idea of breaking from his supply lines and marching to Savannah, foraging on the land along the way after the southern harvest was completed, and destroying infrastructure of any military value, including the large plantations which provided financial support.  In this way, he simultaneously denied the Confederate army valuable resources and denied it Savannah by capturing it.

But how do you move a very large army to do this?  Everyone must understand the intent of the commander.  Each of the officers under command must be given enough leeway to execute the field orders within the timeline, goal and the strictures in the manner in which the effort is to be conducted.  Even privates must understand the purpose of the movement and its intent so that they can operate independently when no senior leadership is present.

Sherman has been libeled in history, particularly by the wave of historians that first followed the war in an effort to justify “The Lost Cause.”  Scholarship, however, particularly that by those historians removed from an agenda, usually view Sherman’s army as especially disciplined during the his march across Georgia, focusing their targets on those specified in his orders, which follow.  Once he was ensconced in Savannah, which he took without firing a shot, he then marched to Wilmington.  Along the way he was particularly eager to punish the state that he felt was responsible for the war, South Carolina, which did suffer the punitive actions of total warfare.  Interestingly, contemporary accounts report and confirm that once his army crossed into North Carolina that it once again became the disciplined army that it had been while marching across Georgia.

HEADQUARTERS MILITARY DIVISION OF THE MISSISSIPPI
IN THE FIELD, KINGSTON, GEORGIA, November 8, 1864

The general commanding deems it proper at this time to inform the officers and men of the Fourteenth, Fifteenth, Seventeenth, and Twentieth Corps, that he has organized them into an army for a special purpose, well known to the War Department and to General Grant. It is sufficient for you to know that it involves a departure from our present base, and a long and difficult march to a new one. All the chances of war have been considered and provided for, as far as human sagacity can. All he asks of you is to maintain that discipline, patience, and courage, which have characterized you in the past; and he hopes, through you, to strike a blow at our enemy that will have a material effect in producing what we all so much desire, his complete overthrow. Of all things, the most important is, that the men, during marches and in camp, keep their places and do not scatter about as stragglers or foragers, to be picked up by a hostile people in detail. It is also of the utmost importance that our wagons should not be loaded with any thing but provisions and ammunition. All surplus servants, noncombatants, and refugees, should now go to the rear, and none should be encouraged to encumber us on the march. At some future time we will be able to provide for the poor whites and blacks who seek to escape the bondage under which they are now suffering. With these few simple cautions, he hopes to lead you to achievements equal in importance to those of the past.

HEADQUARTERS MILITARY DIVISION OF THE MISSISSIPPI
IN THE FIELD, KINGSTON, GEORGIA, November 9, 1864

1. For the purpose of military operations, this army is divided into two wings viz.:

2. The habitual order of march will be, wherever practicable, by four roads, as nearly parallel as possible, and converging at points hereafter to be indicated in orders. The cavalry, Brigadier-General Kilpatrick commanding, will receive special orders from the commander-in-chief.

3. There will be no general train of supplies, but each corps will have its ammunition-train and provision-train, distributed habitually as follows: Behind each regiment should follow one wagon and one ambulance; behind each brigade should follow a due proportion of ammunition-wagons, provision-wagons, and ambulances. In case of danger, each corps commander should change this order of march, by having his advance and rear brigades unencumbered by wheels. The separate columns will start habitually at 7 a.m., and make about fifteen miles per day, unless otherwise fixed in orders.

4. The army will forage liberally on the country during the march. To this end, each brigade commander will organize a good and sufficient foraging party, under the command of one or more discreet officers, who will gather, near the route traveled, corn or forage of any kind, meat of any kind, vegetables, corn-meal, or whatever is needed by the command, aiming at all times to keep in the wagons at least ten days’ provisions for his command, and three days’ forage. Soldiers must not enter the dwellings of the inhabitants, or commit any trespass; but, during a halt or camp, they may be permitted to gather turnips, potatoes, and other vegetables, and to drive in stock in sight of their camp. To regular foraging-parties must be intrusted the gathering of provisions and forage, at any distance from the road traveled.

6. To corps commanders alone is intrusted the power to destroy mills, houses, cotton-gins, etc.; and for them this general principle is laid down:

In districts and neighborhoods where the army is unmolested, no destruction of each property should be permitted; but should guerrillas or bushwhackers molest our march, or should the inhabitants burn bridges, obstruct roads, or otherwise manifest local hostility, then army commanders should order and enforce a devastation more or less relentless, according to the measure of such hostility.

6. As for horses, mules, wagons, etc., belonging to the inhabitants, the cavalry and artillery may appropriate freely and without limit; discriminating, however, between the rich, who are usually hostile, and the poor and industrious, usually neutral or friendly. Foraging-parties may also take mules or horses, to replace the jaded animals of their trains, or to serve as pack-mules for the regiments or brigades. In all foraging, of whatever kind, the parties engaged will refrain from abusive or threatening language, and may, where the officer in command thinks proper, give written certificates of the facts, but no receipts; and they will endeavor to leave with each family a reasonable portion for their maintenance,

7. Negroes who are able-bodied and can be of service to the several columns may be taken along; but each army commander will bear in mind that the question of supplies is a very important one, and that his first duty is to see to those who bear arms.

8. The organization, at once, of a good pioneer battalion for each army corps, composed if possible of negroes, should be attended to. This battalion should follow the advance-guard, repair roads and double them if possible, so that the columns will not be delayed after reaching bad places. Also, army commanders should practise the habit of giving the artillery and wagons the road, marching their troops on one side, and instruct their troops to assist wagons at steep hills or bad crossings of streams.

9. Captain O. M. Poe, chief-engineer, will assign to each wing of the army a pontoon-train, fully equipped and organized; and the commanders thereof will see to their being properly protected at all times.

The most spectacular insights in human history.

A History of a Just & Peaceful Future

The weblog of Echoes, the nightly music soundscape on Public Radio and the internet.

Why Do Projects Fail?

Our past matters today

Both Sides of the Table

Adventures in collecting "modern jazz": the classical music of America from the Fifties and Sixties, and a little Seventies, on original vinyl, on a budget, from England. And writing about it, since 2011. Travelling a little more widely nowadays, and at lower cost

Officer of the Watch
Adventures in Project Management

My ramblings about expeditions in the Project Management profession

A Willing Foe and Sea-Room!

photography from the ground up

Looking at the West

A personal blog of photography and commentary by Andrew McAllister.

the sky is no longer the limit

History, technology, and probably some other stuff

Live to Write - Write to Live

We live to write and write to live ... professional writers talk about the craft and business of writing

The Past and Present Future

Ken Hinckley's Ideas, Visions, and Opinions on the Research Frontiers of Human Technologies

Fear No Project Blog - Focusing on the Management Side of Projects

The Art and Craft of Blogging

The latest news on WordPress.com and the WordPress community.