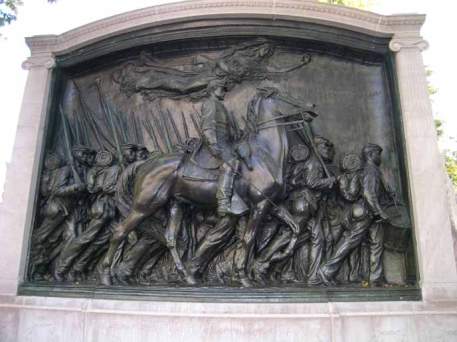 The memorial pictured that sits on Boston Common marks a bit of history that is but an echo of an earlier time to us, it affected me greatly when I actually saw it up close, for it spoke to me.  I felt a kinship over time and space to those men who are represented in bronze and stone and what they might have been thinking as they marched in the cause of equality for all people, of self-government, and of a steady intolerance of extremism, ruthlessness, and violence in defense of a cause, which cause itself was morally repugnant; fear, no doubt, trepidation, hope, pride, and steely resolve to acquit themselves well when the time came for them to do their duty.  It was a time where warfare was very close and personal.

I have some close friends and those I considered to be like family buried in Arlington.  Two died in battle.  Some carried physical and some psychic wounds after their military service was done.  All acquitted themselves well.  There are still those who are alive who are also like family and it will always be so.  Some of these preceded and some that followed me in my own service, and others with whom I served.  They are men and women.  Straight and gay.  Of every religion, belief, ethnic group, and color.  I am the son and the nephew of veterans, and the father of a veteran.  It is this term “service” that binds us together.  Sometimes this bond, among those with similar experiences in very challenging conditions, cannot be put into words, but there is that word.

At one time when someone asked about whether you were in the military you would say “I was in (or am) in the Service.”  Of every bit of writing that I have come across William James comes most closely to describing the meaning of “service” for a democratic people, both in wartime and in peacetime.

James, because of physical infirmities, could not participate in the defense of the union and, with it, to fulfill one of the unfulfilled promises of the Declaration of Independence.  His younger brothers had volunteered as officers in the first black regiments–Wilky to the 54th Massachusetts under Shaw, and Bob in the 55th Massachusetts.  Wilky, in particular, had distinguished himself in battle during the attempt to take Fort Wagner in South Carolina, suffering serious injuries that would affect his the rest of his life.  After the war Bob and he moved to Florida to continue the cause of emancipation through a land company formed to find investors to develop agricultural lands on which freedmen would work.

While Wilky and Bob were the brothers committed to action, William was the thinker and philosopher and learned much from them and their experiences.  In 1897 the memorial pictured was dedicated.  Given the increasingly more destructive and impersonal nature of modern warfare and the arc of where our nation seems to be heading in civil society, I think, for Veteran’s Day, it apropos to read a portion of his address:

“War has been much praised and celebrated among us of late as a school of manly virtue; but it is easy to exaggerate upon this point.  Ages ago, war was the gory cradle of mankind, the grim-featured nurse that alone could train our savage progenitors into some semblance of social virtue, teach them to be faithful to one another, and force them to sink their selfishness in wider tribal ends.  War still excels in this prerogative; and whether it be paid in years of service, in treasure, or in life-blood, the war tax is still the only tax that men ungrudgingly will pay.  How could it be otherwise when the survivors of one successful massacre after another are the beings from whose loins we and all our contemporary races spring?  Man is once for all a fighting animal; centuries of peaceful history could not breed the battle-instinct out of us; and military virtue least in need of reinforcement by reflection, least in need of orator’s or poet’s help.

What we really need the poet’s and orator’s help to keep alive in us is not, then, the common and gregarious courage which Robert Shaw showed when he marched with you, men of the Seventh Regiment.  It is that more lonely courage which he showed when he dropped his warm commission in the glorious Second to head…the 54th.  That lonely kind of valor (civic courage as we call it in peace times) is the kind of valor to which the monuments of nations should most of all be reared, for the survival of the fittest has not bred it into the bone of human beings as it has bred military valor; and of the five hundred of us who could storm a battery side-by-side with others, perhaps not one would be found ready to risk his worldly fortunes all alone in resisting an enthroned abuse….The nation blest above all nations is she in whom the civic genius of the people does the saving day by day, by acts without external picturesqueness; by speaking, writing, voting reasonably; by smiting corruption swiftly; by good temper between parties; by the people knowing true men when they see them, and preferring them as leaders to rabid partisans or empty quacks.  Such nations have no need of wars to save them.,,,

Democracy is still upon its trial.  The civic genius of our people is its only bulwark, and neither laws nor monuments, neither battleships nor public libraries, nor great newspapers nor booming stocks; neither mechanical invention nor political adroitness, nor churches nor universities nor civil-service examinations can save us from degeneration if the inner mystery be lost.  That mystery, at once the secret and the glory…consists in nothing but two common habits, two inveterate habits carried into public life—habits so homely that they lend themselves to no rhetorical expression…One of them is the habit of trained and disciplined good temper towards the opposite party when it fairly wins its innings—it was by breaking from this habit the slave States nearly wrecked our Nation.  The other is that of fierce and merciless resentment toward every man or set of men who break the public peace…”

The most spectacular insights in human history.

A History of a Just & Peaceful Future

The weblog of Echoes, the nightly music soundscape on Public Radio and the internet.

Why Do Projects Fail?

Our past matters today

Both Sides of the Table

Adventures in collecting "modern jazz": the classical music of America from the Fifties and Sixties, on original vinyl, on a budget, from England. And writing about it, since 2011. 100% coronavirus-free content.

The Practicing IT Project Manager

Officer of the Watch
Adventures in Project Management

My ramblings about expeditions in the Project Management profession

A Willing Foe and Sea-Room!

photography from the ground up

Looking at the West

A personal blog of photography and commentary by Andrew McAllister.

the sky is no longer the limit

History, technology, and probably some other stuff

Live to Write - Write to Live

We live to write and write to live ... professional writers talk about the craft and business of writing

The Past and Present Future

Ken Hinckley's Ideas, Visions, and Opinions on the Research Frontiers of Human Technologies

Fear No Project Blog - Focusing on the Management Side of Projects

The Art and Craft of Blogging

The latest news on WordPress.com and the WordPress community.